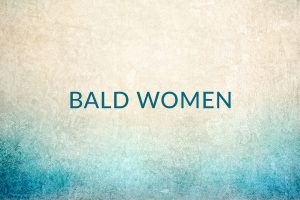 When we think of baldness, the image that usually appears is one of a middle-aged man with a rapidly, aggressively receding hairline. At Advanced Hair Studio, not only do we know that that’s a thoroughly unfair stereotype – but that it simply isn’t true.

Women are often thought of as immune to many of the most common hair loss scenarios. Unfortunately, not only can women contract many of the same hair loss diseases and disorders, but many hair loss issues are also unique to females.

Baldness in women is real, and silently affects thousands in Australia alone.

The History of Women and Baldness

Historically and culturally, bald women have typically been associated with several different personality traits or characteristics.

The first and most prominent of these also happens to be the most unfair. Bald women have been consistently associated with witches and witchcraft throughout history. That’s because of the high levels of importance that society places on women and their hair.

It’s no wonder that women report feeling intense feelings of shame and embarrassment surrounding their hair loss. This is a problem that needs to be addressed.

Why do Women Go Bald?

Contrary to popular belief, there are just many ways for women to lose their hair as there are for men.

What Can Be Done to Treat Baldness in Women?

Thanks to Advanced Hair Studio, we now have the solutions to women’s hair loss problems.

Our Female Advanced Laser Therapy – which has a 90% success rate – regrows your hair with our industry-leading laser beam technology.

Our distinctive Female Hairfusion treatment has a 100% success rate, and you won’t even need surgery.

Finally, our Flashpoints hair extensions can introduce your thinning hair to a new world of thickness and length.